Suggest a product you did not find
×
Feedback allows you to report problems that relate to our website. We also encourage you to submit general comments and ideas.

Name of the product:

Click on the part of the page you would like to give feedback about
×
Feedback allows you to report problems that relate to our website. We also encourage you to submit general comments and ideas.

Please rate your experience with this specific item

Name of the product:

General:
The deck is the fundamental component of a scooter, and the biggest influence on its performance and overall ‘feel.’ In the last 5 years, decks have developed a lot. In 2009, most of the decks were still foldable. Today, added to the facts that decks are now much stronger, a lot of new features have been introduced to make their performance more accurate and efficient.
The deck is a combination of several components – the head-tube (where the fork is inserted,) the footplate usually created by aluminum extrusion, and what connects the two. There are three common ways that the connect these components:
Down-tube - A singular tube with a cross-section of either a rectangle, oval or trapezium. It is connected to the footplate by either being welded on top, plunged through the deck to the bottom, or bolted to both components.
Neck-plates – Two identical plates which separately join the footplate and head-tube together, often reinforced with a gusset at the bottom and top.
Combined Mechanism – Makes use of both a Down-tube and neck-plates. The down-tube is often welded to the head-tube component whereas the neck-plates are welded to the footplate, and both ‘slot together,’ often fixated with bolts.
Let’s not forget that every scooter part, the deck in particular, is made for the purpose of use, so they will all break, eventually. In the scooter industry, it’s commonly accepted that a deck has had a good life after 6 months of frequent riding.

Weight:
Weight is a big issue when it comes to the deck. It’s the part in which weight distribution has the biggest influence on the scooter’s ‘behavior.’ Theoretically, it’s possible to make a near ‘indestructible’ deck, but at this point the weight would be far beyond practical, impossible to ride normally.
In theory, the heavier the deck is, the more resistant is it (as there is more substance.) Realistically, you can make a 1200g deck that would have more resistance than a deck weighing 1800g. Geometry, materials, chemical treatments, and quality of production are also important factors.
A heavier deck will give you more stability in the air than a deck of less weight, whereas a lighter deck will be much more responsive. Bear in mind that moving from a light deck to a heavy deck (or vice versa) will take some time to get used to, as when you attempt a trick, you will instinctively apply the amount of force you would, normally. Therefore, it will either respond less or more than you expect.
Don’t focus too much on the ‘total weight.’ Indeed, if the deck is rear-heavy, the point of rotation will feel closer to you, almost like its pivot point lies in the centre. However, decks which are front-heavy will feel like they rotate around the fork. It’s up to you to choose what feels best; it’s all about personal preference.
Another thing – Pay attention to the weight information given by the brands, as they often purposely forget to include the axle and the brake in the ‘total weight.’ Every weight indicated on our shop is verified by us, so you can trust their accuracy.

The deck length will have a very important influence on your scooter. Do not include the head-tube and the folding when you measure it, just the foot-plate.
A short deck is suited to young or small riders. Spinning the deck will be easier, but the aesthetics of riding may suffer.
A longer deck will have a slower spin, but will give you more stability and more grinding surface. Above all, a longer deck will give you more ‘pop’ and make higher bunny-hops easier. As the wheels are further apart, more leverage is required. Beware of another thing. A longer deck is much more sensitive to stress, so it’s harder to build a solid long deck. With this in mind, remember to choose a reliable brand if choosing a long deck.

Deck width is mainly for feet comfort. The larger the deck, the more comfortable and stable it will feel. Be aware that more width means less ground-clearance when the deck is leant to one side, especially with pegs.

Concave started to appear on scooter decks in 2009. Prior to that, all the decks’ footplates were completely flat. Concave is typically measures in degrees, but occasionally in radians.
The concave shape, inspired by the design of modern skateboards, holds your feet better. It gives you more grip to throw (and catch) whips and other tricks with your feet as the edges are risen higher than any point of the deck. Meaning it’s easier for your foot to make contact between the edges on the deck’s either sides.

With the rigid ‘mono-bloc’ decks, a lot of different angles were tested. The most common angle is 82.5°, but you can easily find decks with an angles ranging from 81° to 83°. Decks with an angle beyond 83° (such as the Micro XT with 84°) have now become obsolete. Head-tube angles are always measured in degrees (°.)
The angle also determines the scooter’s overall feel, by changing the rider’s position. With an angle of 83°, the bar will be more vertical, and further away from the rider’s body, allowing more room for Bar-spins. Angle, like weight and size, is a matter of personal preference – there is no overall superior angle. 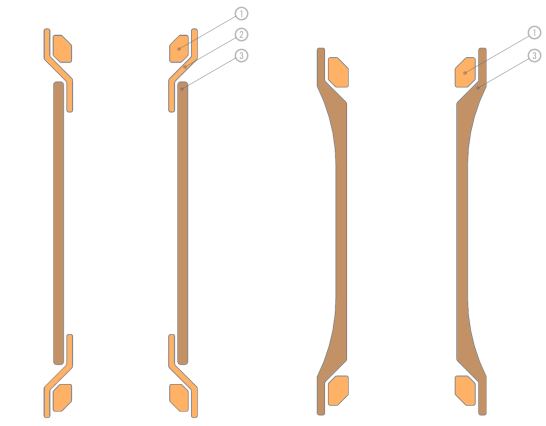 There are three types of head-tubes. Some are made for use with normal headsets, others with semi-integrated, and the rest with fully integrated headsets.
The first type, though cheaper, is slowly becoming obsolete. You have to install the headset cups manually, so it can be complicated. It also affects the deck’s weight and aestheticism. It’s often used on entry level decks.
Decks for integrated headsets appeared in 2009 with the TSI decks. Just put the headset bearings in the headtube and you are all set. More expensive to make, they are usually used on high-end decks. The disadvantage is that there is no standardization of bearing sizes, with some being different heights to others. The one most common is known as 41.8 x 45°. The size is usually printed on the bearings.
Make sure to choose the right headset when you buy a new deck.

Forged structure:
This technology was first introduced to freestyle scooters in 2011 with Envy (formally known as ‘Blunt.’) Usually, a deck’s structure consists of three components being welded together. On a forged deck, the head-tube and the down-tube are just one piece of aluminium. They are ‘forged’ together (a process which involves crushing the material with several tons of pressure in order to shape it.) Then it is CNC-machined that will shape the new one-piece component.
Forged decks are much more expensive to produce, so you will only find that technology on high-end decks. Decks made in this way will have much more resistance on the head-tube to down-tube ‘joint,’ which is the weakest area of the deck’s profile.
The production accuracy is also much better. In fact, a non-forged deck given an angle of 82.5° may actually have a real angle between 81.5° to 83.5°. However, with a forged deck, the more accurate production will ensure that a deck given with an angle of 82.5° will never have a difference of more than 0.2°.